Ready to fly at the BCRCC PolarBear

I'm back from the third (and fourth) flight, and it keeps getting better! OnFriday (New-Years Day) I went to the BCRCC (Benton County Radio ControlClub) "Polar Bear" event. Basically, the idea is: On new years day, rain or shine, everyone comes and flies something. There is a raffle for all those that fly. I brought the Kadet, mostly because that's the only plane I have, and the tiny Blade mSR that I got for X-mas. 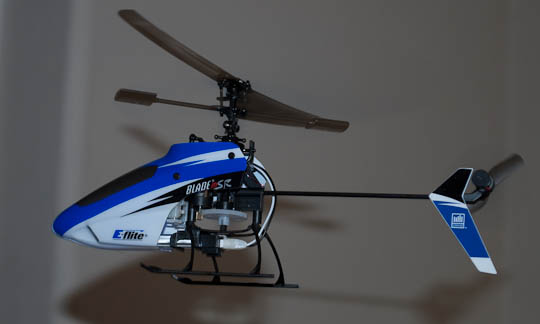 The Kadet's second flight was somewhat uneventful. Flying during an event invariably leads to crowded skies, because I didn't have the runway to myselfI just tried to stay out of people's way. I was still pretty unfamiliar with my plane so it was nerve-wracking. Luckily I did a good job landing with all those people watching :).

Today, I went back to the field with my Kadet, and a new plane that I got at the BCRCC auction for $20 in November. It's a "Funtana Mini" made by E-flite that has since been discontinued. Since the auction, I've been slowly getting the parts I needed to complete it, including a receiver and servos. I reused the motor from another plane that is no longer with us. 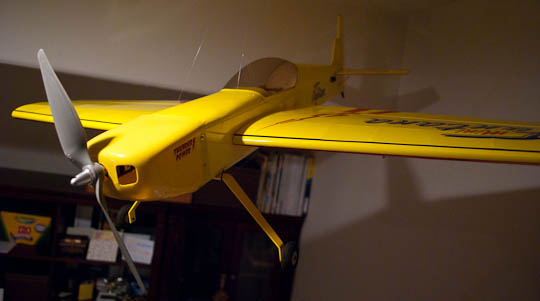 I piloted it on its maiden flight today. It is extremely twitchy, even on low rates. Also, something I didn't expect was how hard it would be to land it. It requires a fairly high airspeed to maintain altitude, and there isn't much frontal area to slow it down, so the landing was fast. I wasn't able to stop it by the end of the runway so it spent some time in the mud. Nothing was damaged, but the mud at the airstrip is very stinky. The second flight was more fun, I actually did some aerobatics. I still had trouble bringing it down, though.

I wasn't satisfied with the prop I was using in the first flight test, which was an 11x7 APC E-series. I bought 2 more, one with higher pitch speed (for the uninitiated, "pitch speed" is the number of inches a propeller would travel forward in one revolution in an ideal fluid) and the same thrust (which how hard it "pulls"), which I think is an 11x8.5 E-series, and one with the same pitch speed and more thrust; a 12x7 E-series, I think. I tried the one with more pitch speed first, and I'm not rushing to try the other one. I'm quite happy with the performance as it is. At full-throttle I can climb-out at45°, and at 1/4 throttle I can maintain altitude and speed. I'm also very happy with the observed endurance. I ran the stop-watch on my radio during the second flight of the day while doing non-stop touch-and-go's, and after 12minutes of flying called it quits. The resting battery voltage on my 3S 2100mAh LiPo was 11.4 volts. This roughly corresponds to 20% of the pack power remaining. With this knowledge in hand I know that I can set the count-down timer on my radio to 12 minutes and not stress-out my batteries too much.

Altogether, it was a good (long) weekend of flying!