I've finished building the first (and my first) Yagi antenna for the Kadet video downlink. I mentioned in the first video post that a new, and better, antenna would help greatly.

I was able to find some designs online that fit my needs. The major constraint that I had to deal with is the impedance issue. Nearly everything amateur radio related is 50 ohms, and nearly everything video related is 75. The cheap Yagis paper written by Kent Britain, WA5VBJ, has a 75 ohm 421 Mhz antenna intended for amateur television (ATV). My transmitter is 434 Mhz, but I figured it would be close enough. The great thing about these designs is that they can be built using supplies from a standard hardware store. The elements are made from #10 bare copper wire, and the beam is wood. 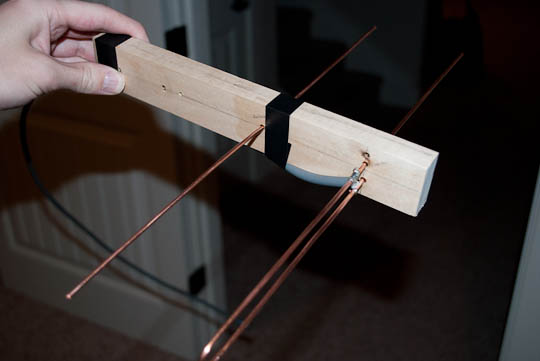 An interesting characteristic of antennas, and RF in general, is that to get a stronger signal you often have to make compromises. A Yagi works by increasing the directionality to increase the signal. Unfortunately, because my plane is going to be flying around, I can't be too directional. To get better results, without making things worse, I decided to only use the reflector and "driven element". By eliminating the "directors" I hope that I can get the best possible results. (If you're confused by this "director", "reflector", and"driven element" gibberish, the best place to look is the wikipedia article. But all that is necessary for this discussion is that the reflector is behind the driven element [which connects to the transmitter or receiver] and reflects the signal forward, and the directors go in front and focus the signal into a narrower beam). 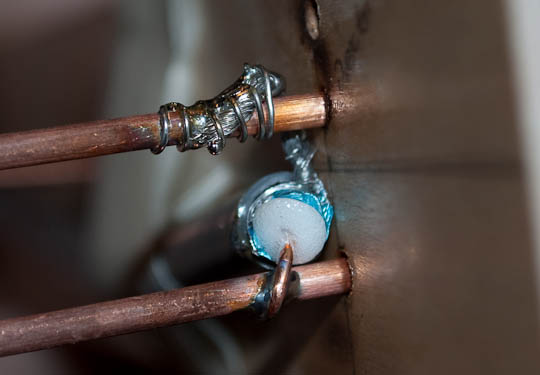 There were some problems during construction that I should mention to help others wanting to try something like this. The antenna designs specify that the feed cable should be soldered directly to the driven element. This should work great on traditional 50 ohm radio cabling, such as LMR or RG-type cables.These cables have copper braid shield around the circumference. With the 75ohm cable used in video, often made as cheaply as possible, a loose aluminum braid is used as the shield. This is a major problem that I had to deal with.It took me a while to even understand why the braid wasn't soldering. I think I assumed that the braid was made of tin. After a few hours of searching, I discovered it was aluminum. Aluminum oxide forms almost immediately and can't be soldered to, so even sanding the wire doesn't help. There are solder pastes and fluxes that help, but I wasn't interested in waiting for something to be shipped. My solution, if you want to call it that, was to mechanically attach the braid to some other wire that can be soldered.

In the first image of the post, I'm comparing the new antenna versus the others I used earlier. When the Yagi was installed, I rotated the antenna 360˚in azimuth to get an idea for how directional the antenna really is. There wasn't much of a change in signal quality, so it isn't very directional. If the transmitter were further away it may have been more dramatic. I am motivated to build a few more antennas, maybe with 1 and 2 directors to see which is better. With that said, I'm pretty satisfied, and I'm hoping for good weather this weekend.

b.t.w: Just to dispel any fears that the shield is shorted to the center conductor, as it appears in the above photo, it was, and I fixed it. Here is a photo of the feed point as it was when I tested it. Also, notice that I got my driven elements and directors confused when I wrote on the board :)

Another view of the feed point