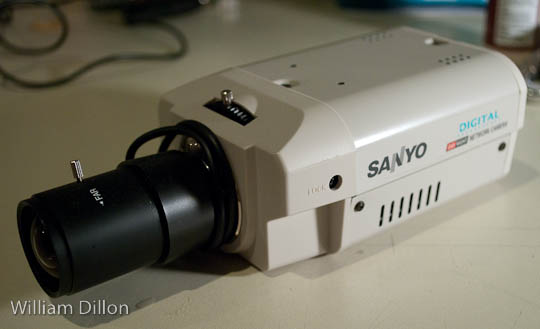 Well, as a (perhaps welcome 😉) deviation from the spectrum analyzer posts,I've spent a little time working on repairing a security camera I've been hanging onto for a while. I've been toying with the idea of installing it near the radio control flying field as someone in the club knows the owner of a nearby business.

The problem with the camera is that it has trouble switching from nighttime mode to daytime mode. At night, it is sensitive to Near Infrared light (such as what is transmitter from your remote control). During the day, however, this sensitivity makes the colors look strange. To cope with this, they have a filter that slides in front of the lens for the daytime. This filter binds, and because of this, the camera is always in nighttime mode. I decided to go ahead and disassemble the camera to try to fix it. My motto: If it's broke and out of warranty, take it apart! 😀 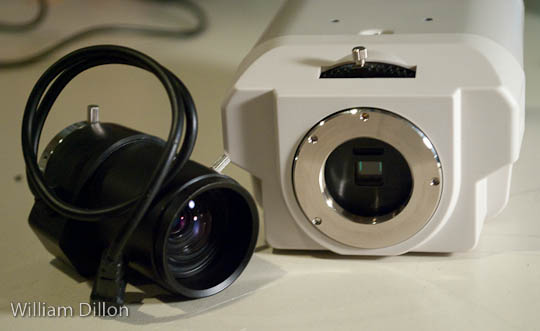 You can (kinda) see in this photo the image sensor. This metal mount can move forward and back to accommodate different lenses and adjust their focal length. 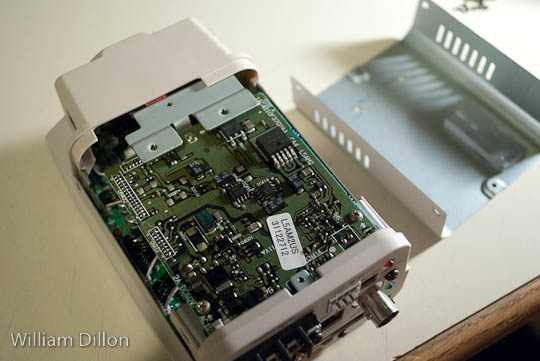 Removing the bottom cover reveals the power conversion board. 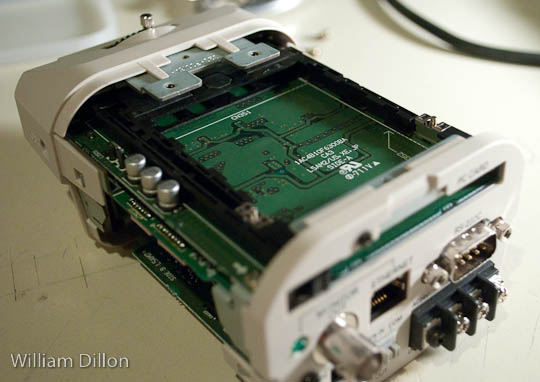 Removing the top cover reveals the PCMCIA slot. This camera is kinda cool in that it can accommodate either a memory card or a wireless LAN card in this slot. Also, there is an ethernet port on the back. It has an embedded web interface that allows the control of camera functions and viewing live video.Apparently, there is the ability to get some information from the serial port, but I haven't found any information about it. 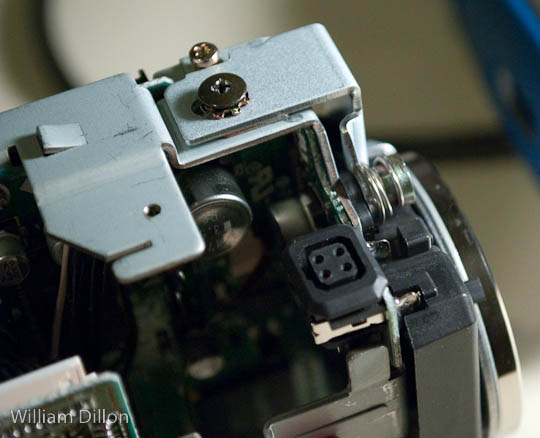 Like I mentioned before, the front lens mount can be adjusted front-to-back.The black screw near the top of the frame is used to secure the mount. More to the right of the frame, the spring is used to press the mount against a set of wedges that control the depth setting. The 4-pin connector goes to the lens iris, which is kinda like the aperture of a still camera. 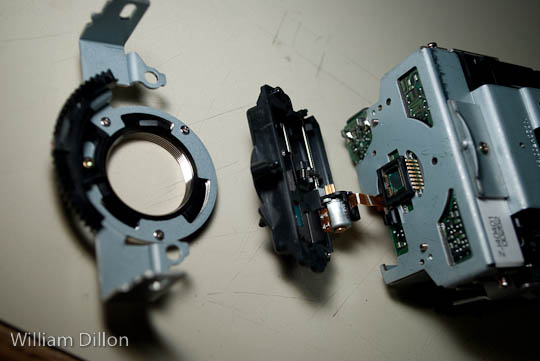 This is the front of the camera disassembled. The image sensor is still attached to the camera frame. The black piece of plastic is the filter module, and the other piece is the metal frame for mounting the lens and adjusting the focal length. 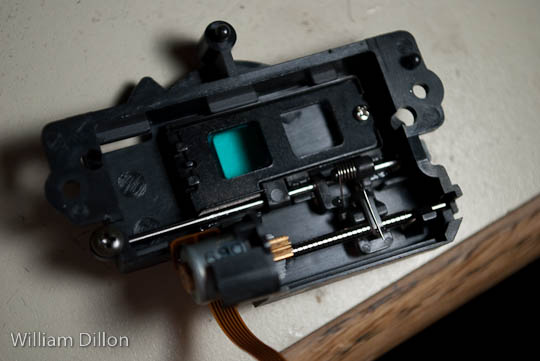 This is the device causing all the trouble. The slight green tint in the left frame is the IR block filter, and the right is clear. The motor is a small gear-head motor attached to a worm gear. The worm gear has very shallow cuts in it. The spring pushes down on a small plastic follower. The whole system is intended to allow the worm gear to continue turning even if the system is jammed. I think this is so that limit switches aren't necessary. I figured that the problems I'm having are due to excessive friction, which would cause the frame to remain static while the worm gear turns. My first thought was to place a little petroleum jelly on the sliding surfaces. I re-assembled the front of the camera and found that the problem remained. However, I noticed that when the lens mount was all the way against the camera it would stick. I could then solve the problem by keeping the lens not-quite against the camera. 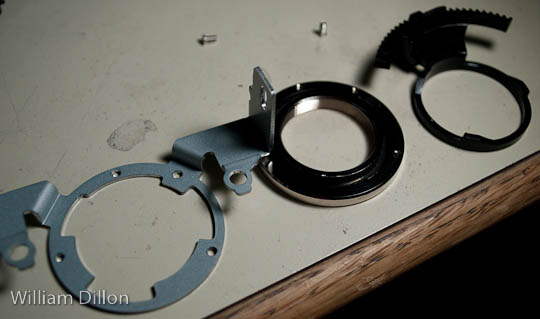 Before re-assembling the camera, I decided to lubricate the adjustment assembly. The black plastic ring on the right includes the adjustment wedges.The middle ring is the precision-machined lens mount with a channel for the plastic ring. The punched metal piece on the left completes the assembly.

Anyway, I put the camera back together. It works great now. I'm a little embarrassed to admit that the problem was simply that the lens can't be in the closest setting for the filters to work. At least everything went back together without a hitch. :)