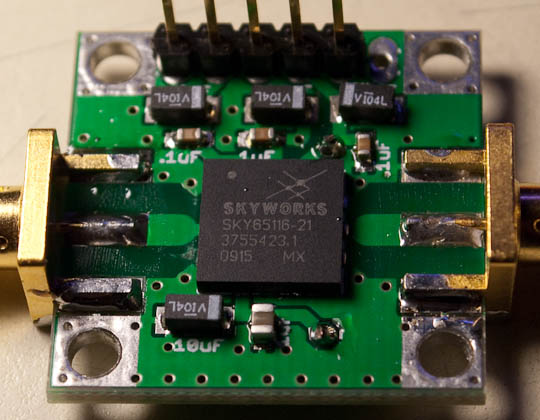 I've finally gotten around to assembling a breakout board for the Skyworks SKY65116 UHF amplifier. It's really amazing how the state of the art in RF ICs has advanced. They can still be on the expensive side ($6 at digikey),but still relatively cheap when you consider the cost of all the support parts that it takes to build an amplifier from a RF transistor. This particular amplifier has a 50 ohm input and output, and 35dB of gain. It works from 390Mhz to 500Mhz, which means its perfect for the 70cm ham band. The breakout board is stupid simple, copied directly from the evaluation board schematic in the datasheet, but I'll include schematic and design files anyway. 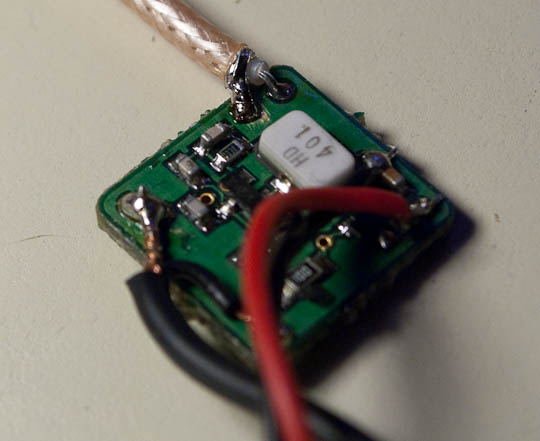 Source for the amplifier test

This is the video transmitter from my first personvideoexperiments. The performance was pretty terrible, even after I tested it using different receive antennas. I've even purchased a receive-side amplifier to try, but haven't done anything with it yet. Anyway, the transmitter had a built-in antenna, so I wasn't sure how I was going to add an amplifier. I ended up assuming that the output would be roughly compatible with an 50 ohm load. I unsoldered the antenna and installed a bit of thin coax to the antenna port. I scratched off some of the solder mask on either side of the board near the antenna port to make sure I had a solid electrical and mechanical ground connection. The transmitter is pretty crappy, and the prices you can find online are COMPLETELY RIDICULOUS! I wouldn't pay more than $20 for it. I think that's about what I paid, it was on clearance. 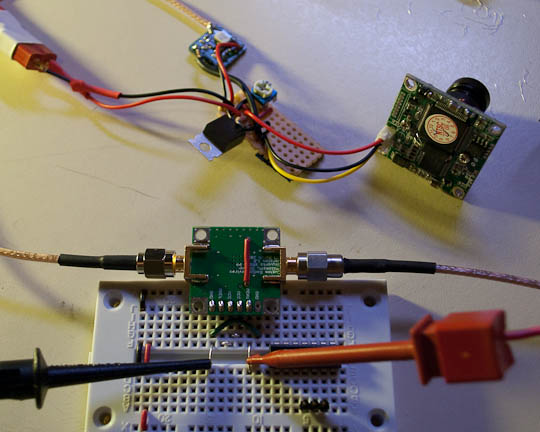 This image is the testing configuration I used. The camera, power board and transmitter are in the top of the image, and are exactly as I used them for first person video. The added coax can be seen going into the amplifier on the left. Coming out of the amplifier is the cable going to the oscilloscope or spectrum analyzer. The amplifier wasn't inline all the time, though. I measured the output power from the transmitter at about 25mV into 50 ohms using the oscilloscope. Using Minicircuits' handy table that comes out to be about .01 mW, or -19 dBm. A measurement from a spectrum analyzer verifies the -19 dBm measurement from the o'scope (see below for image). 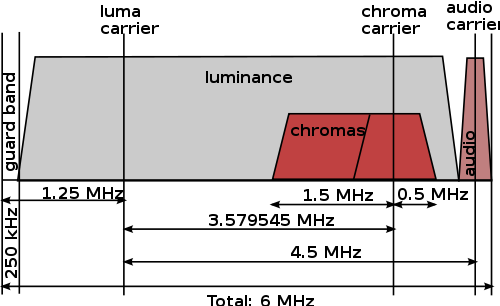 I've attached a very nice graphic from wikipedia that describes the components of modulated NTSC video. There is something happening here that isn't obvious, so I'll explain it. In the spectrum analyzer image, below, you'll notice thatI've labeled the luminance and chrominance carriers. The luminance carrier is really the main carrier for the entire signal. It comes from black and whiteTV era. There are significant DC components in NTSC video, so this carrier is very important. Notice, in the graphic above, that the luma carrier is 1.25Mhz above the lower edge of the band. This is because NTSC video uses what's called VSB, or vestigial side band, which means that the lower half of the signal is attenuated. This reduces the spectrum necessary to transmit video. The choice was made to include the carrier and 1 Mhz with of lower sideband while removing the rest. Later, when color TV was added, they needed a way to encode color. This is done by adding another carrier and encoding hue and saturation by modulating the phase and amplitude of this carrier. All this is explained at length, and probably much better, in the wikipedia article on NTSC. 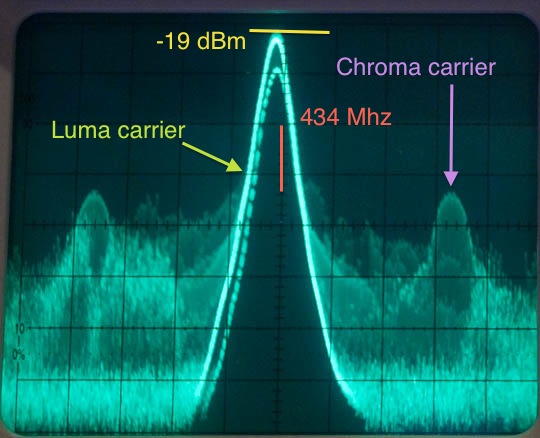 In the spectrum image I've included above, it's clear that the little transmitter uses AM rather than VSB. You can tell because AM modulated signals are always symmetrical with respect to the carrier. If it was VSB, the spectrum on the left side of the carrier would be suppressed. You may notice that the left and right side don't look 100% alike. This is because it takes time for the analyzer to sweep the band (it does this 30 times a second), and it will be analyzing the spectrum of a different part of the image as it scans. 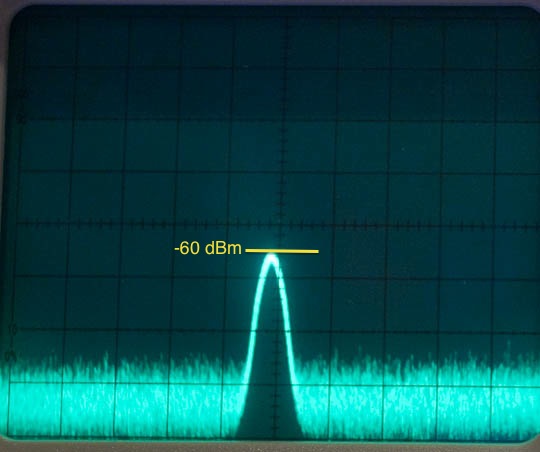 Well, that was an unexpected tangent! Back to the amplifier… In the above image I have the amplifier in the signal path from the source to the analyzer.It's disconnected from any power. I'm a little off on the "-60 dBm" text, it's closer to -64 dBm. I was interested in seeing how much RF would leak through an unpowered amp. It appears that the amp provides a little more than 40 dB of forward isolation between the input and output when it's unpowered. 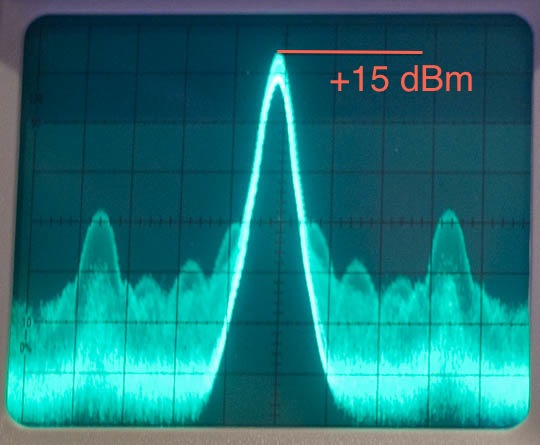 Finally, this is the spectrum when the amplifier is powered on. I had to install 40 dB of attenuation on the analyzer to capture this image. The peak of the carrier is almost 5 dB lower than the top line, so it's about 36 dB stronger than the input. This is inline with expectation, as the amp specifies+35 dB gain. The resulting signal is +15 dBm, which is a modest 32 mW of power. The hope is that through a better antenna and some amplification I can get better performance from the video link.

A word about the legal implications. Ham radio people are notoriously concerned with the rules of everything they do, so I feel obligated to mention them. In the U.S., at least, 434 Mhz is a commonly used ATV (amateur T.V., or "fast scan TV") frequency. There is some concern due to the proximity to the "satellite only" frequency band of 435 Mhz to 438 Mhz. This means that the carrier is sometimes shifted to 433.92 Mhz, as this transmitter is. Some of the sidebands still end up in the satellite only band, but with much lower power. Because this amplifier only outputs +15 dBm I'm very unlikely to upset anyone with its use, though I should think about adding an overlay with my call sign to the video at this power level. Maybe I'll have a new 8-bit microcontroller project…