It has been a while since I finished the transceiver modules, and I how now used them in an actual application. But, before I talk about that, I'd like to show some pictures of the process I used to put them into enclosures. I had some of these cast aluminum enclosures lying around, so I thought I'd use them. They're a little on the heavy side, as the completed weight is around half a pound, but it's well within the carrying capacity of myKadet.Before diving into the process of cutting the holes, I want to show some images of the transceiver board with the RFI fence installation process. 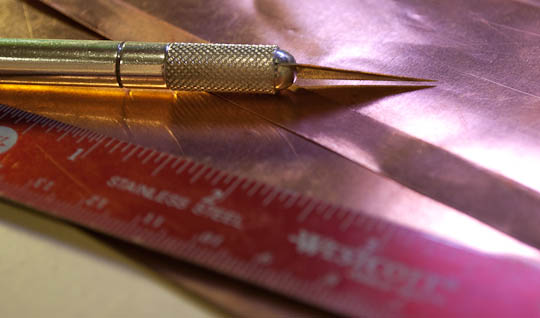 For use with the spectrum analyzer project, I found some sheet copper at the craft store. It was sold at a local crafts store, and I think it was for etching. I chose the thickest one they had. So far, the best way I've found to cut it is using an exact and straight edge. I tried scissors, and it didn't really work. 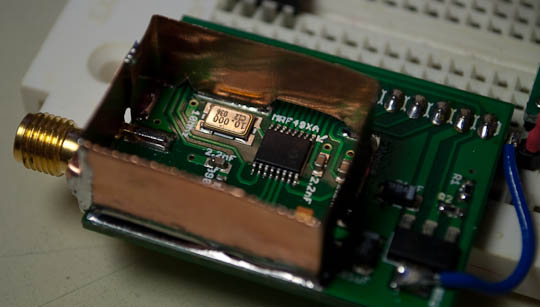 Once the board was prepared, both by soldering on a fence and replacing the pin header with a right-angle one, I began to prepare the enclosure. I was intending to drill a hole for the SMA connector, then cut a hole for the digital connection. The SMA connector hole was trivial to make, though the connector I soldered onto the board was a little short. I ended up having to use an O-Ring from the hardware store (look in the plumbing section) to hold it in. When an antenna or cable is screwed on the O-Ring compresses, having the nice side-effect of sealing it. 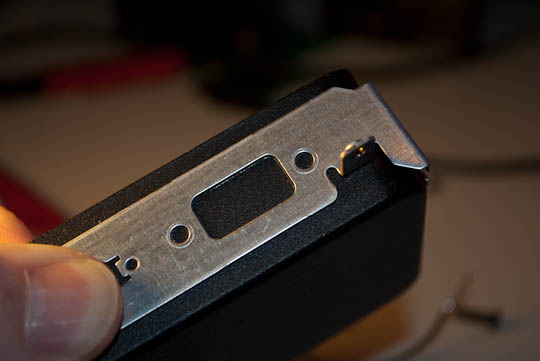 For the digital connection, I decided on using a DB-9 connector. I figured it was a prolific connector, so I should have lots of connectors laying around.That didn't turn out to be as helpful as I had hoped, but I'll get into that later. To create nice holes for the DB-9 connectors I decided that I could use an old PCI bracket as a template. I lined the bracket up against the side of the enclosure and traced it. On the black box, I traced it using a knife, and on the grey box I used sharpie. 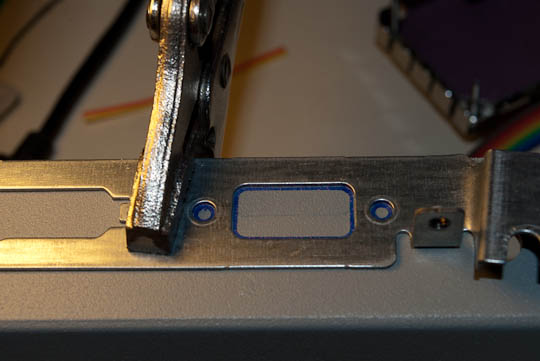 Once the outline was traced onto the box, I drilled holes for the retention screws. Then, I drilled out as much as I could of the trapezoid shaped interior. I most used the drill press, then the dremel with a router/cutter bit. I made sure to leave a margin inside the perimeter to remove with the files. I had avoided purchasing a set of jewelers files for a while, I think I assumed that they were expensive. They're not, you should get a set. 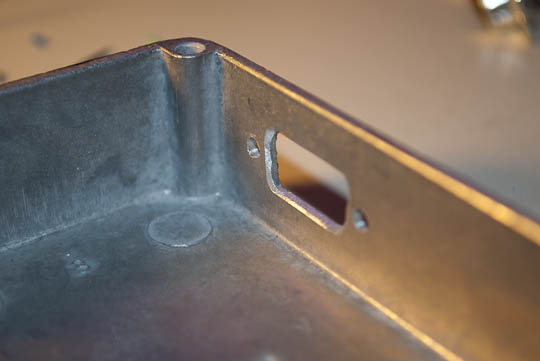 In the photo above, you can see the finished penetration for the DB-9. I beveled the inside edge to make room for the fillet on the connector that I had. The black box got a male DB-9, and the grey box got a female one. The oles need to be about the same size, as the male shroud always has to fit over the female connector body. 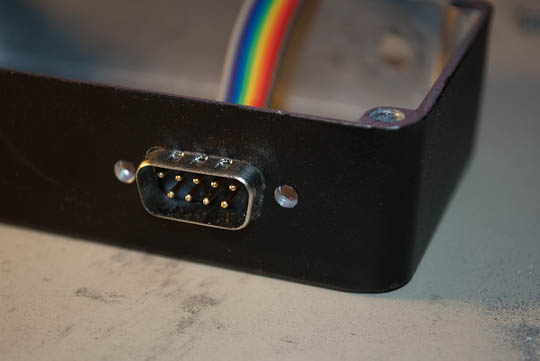 In addition to the RF and digital connectors, I needed a way to securely mount the internal circuit boards. The way I chose to do this was first to drill holes in the bottom of the box, then "countersink" some screws into it. I have countersink in quotes because I don't have a countersink bit, so I used a larger drill bit. You can see the results of this in the headline picture of this post. Though I think it looks pretty good, I still decided to buy a drill& tap for 4-40 screws after building the black box. For the grey box, I used the tap and screwed directly into the box. This requires slightly less hardware and looks pretty good, I think. 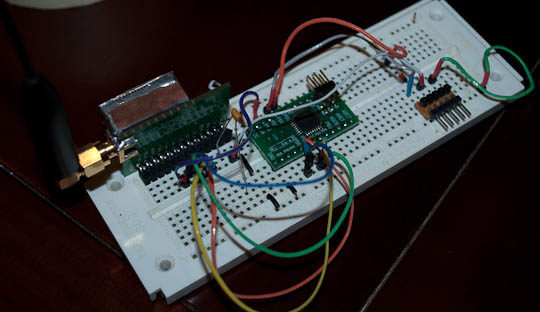 For whatever reason, the board I built for the black box using some veroboard-style construction didn't work the same as the breadboard. Because I was under time constraint (I was planning on flying one of the transceivers over the weekend. I decided to put it back on the breadboard and use it as the basestation. This version uses an FTDI cable to connect to my computer. 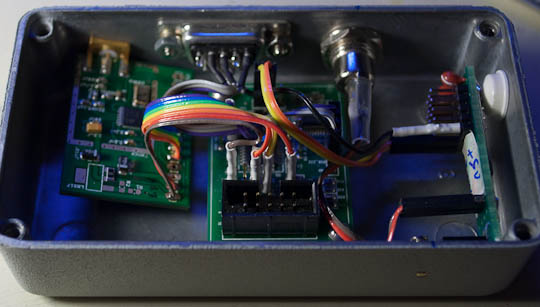 For the grey box, I used an extra ATMega48 breakout board I had. This one worked just fine in the enclosure, so I flew it. I also built a power regulation/distribution board, seen on the right of the photo. This concludes this article. Now that I've got at least one flight worthy transceiver I can test them in flight. That'll be detailed on a future post.